Clonmore, Carlow is a great choice for travellers who want to feel as though they’ve slipped into another time.

Clonmore or Cluain Mór Meadhoc which means “Mogue’s large meadow” is a small village in the north-east of County Carlow. It’s just under 28 kilometres from Carlow town and the nearest small town is Hacketstown which is about 6 kilometres away. 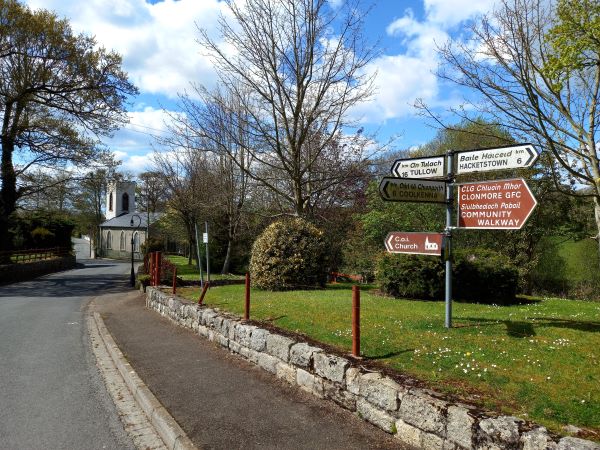 In around 560, St. Mogue founded a religious community and built a monastery here. It’s believed that at one time the settlement was inhabited by about 5,000 monks and scholars. St. Mogue died at the beginning of the 7th century and his feast day is on the 11th of April.

Even though this is a very small village, it offers many tantalising glimpses into its history, beautiful scenery and relaxing, pleasant walks. 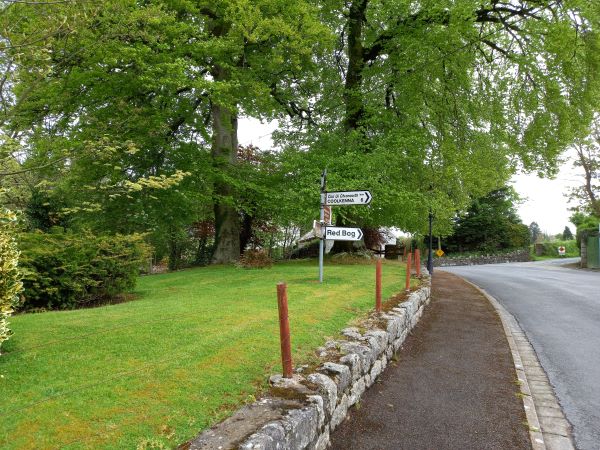 The Old Chapel and Graveyard

Coming into the village via the Tullow road, take a right at Byrne’s pub and onto the chapel road. Drive past Our Lady of the Wayside Church (the new church) which is on your left and shortly you’ll come to the Old Chapel and graveyard on your left also. 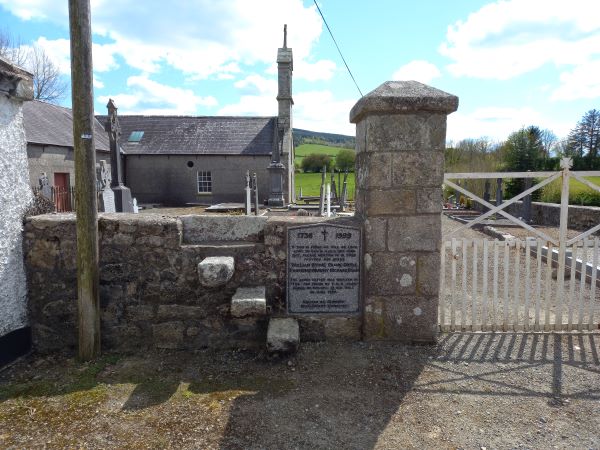 Before entering the chapel grounds, have a look at the plaque on the graveyard wall which is about the discovery of a letter hidden within the wall nearly 300 years ago. 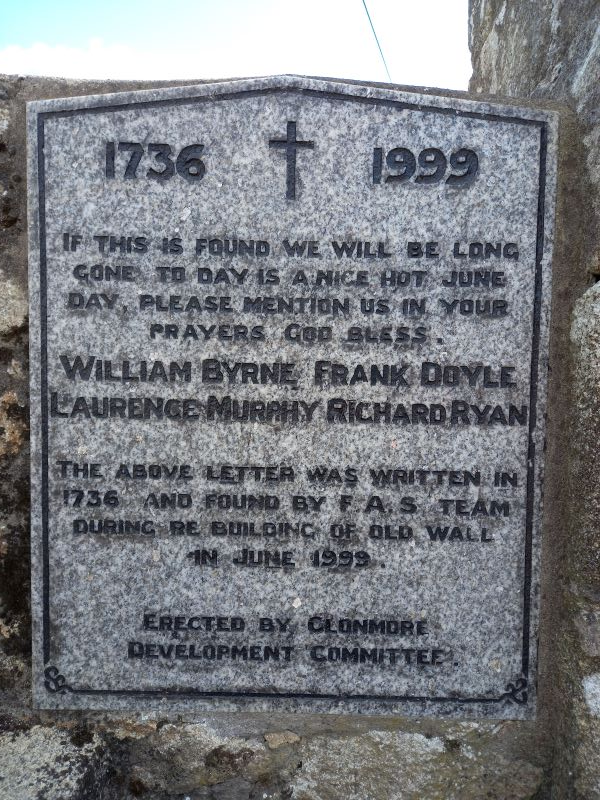 There’s lots of old graves and headstones here and some with railings around them. You can walk all the way around the chapel and there’s a good view of Killalongford Hill. You’ll also hear the sound of a stream that runs beside the graveyard. 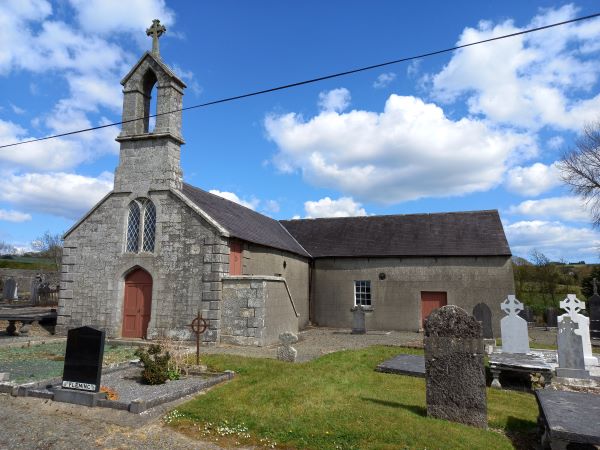 I met with Clonmore historian Eddie McDonald who told me about a priest called Fr. Mullins who was once buried here.

Originally from Co. Offaly, Fr. Mullins was a curate in Clonmore and was known to have healed many people. When he died at a young age in 1818, people would visit his grave and take some clay from it believing it to have curing powers. 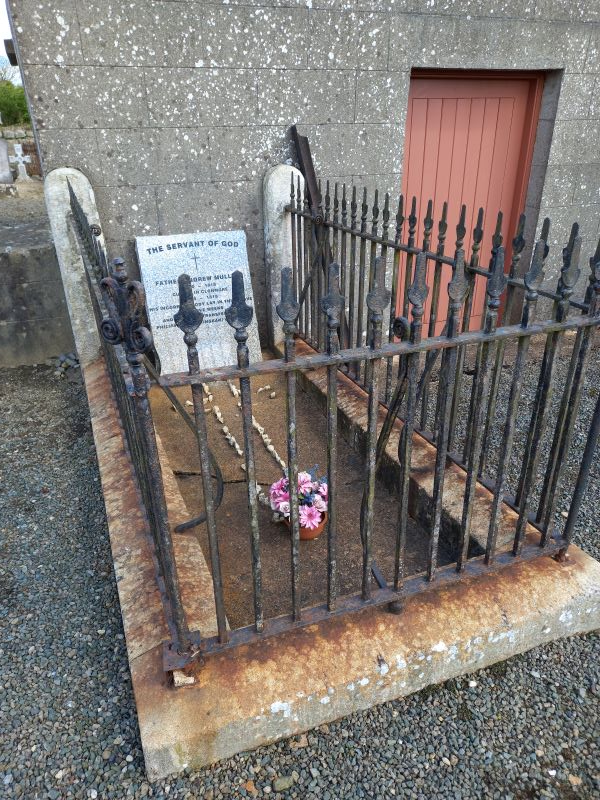 The former grave of Fr. Mullins

His family wanted to bring his remains back to Offaly and upon exhumation his body was found to be incorrupt.

He’s now buried in the townland of Killaderry in Daingean, Co. Offaly.

Next, drive back towards the centre of the village and park outside the pub. Walk downhill onto the Tullow road and St. John’s Church of Ireland (built around 1812) is the first building on your right. 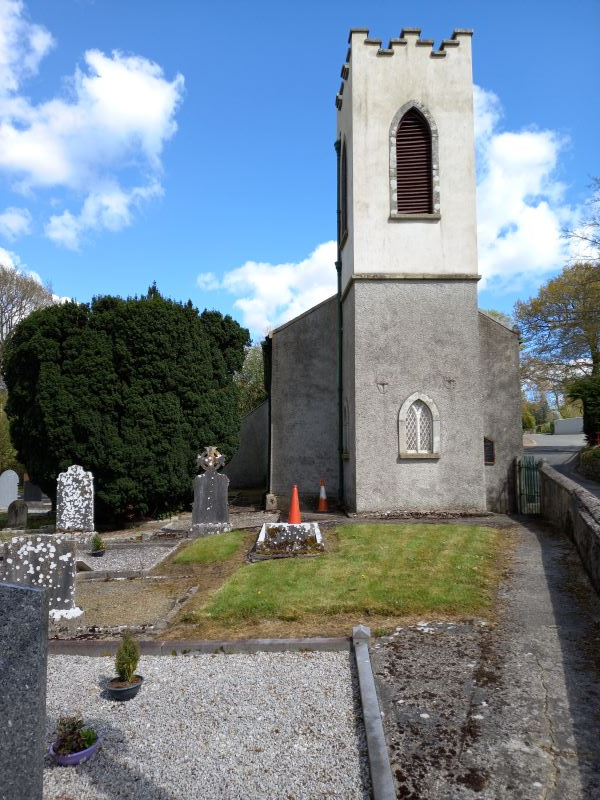 Open the gate, have a walk around the triangular graveyard and you’ll see the Mission Cross - a single piece, large, granite cross facing the road. 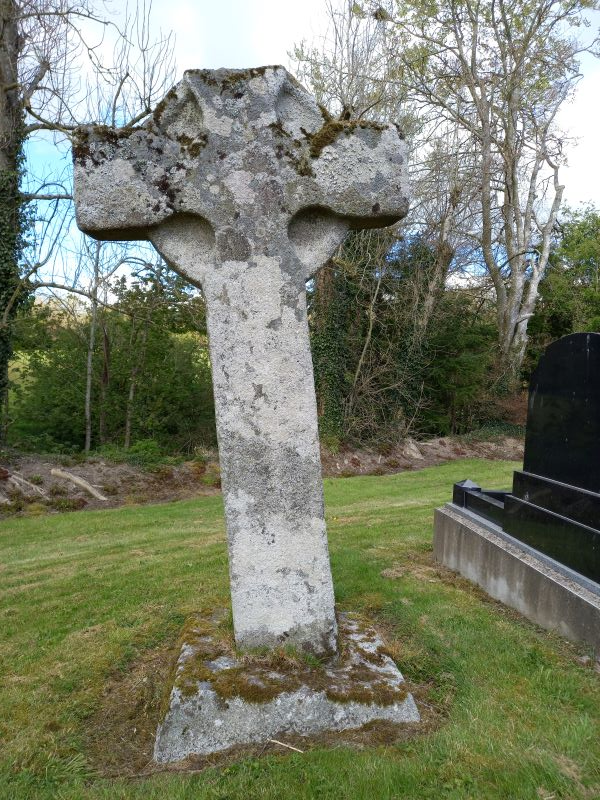 Measuring about 7 feet 3 inches tall (excluding the base), approximately 4 feet across its arms and about 10 inches wide, it’s believed to be standing on the spot of the ruins of a small church.

Come out the graveyard gate (don’t forget to close it!) and cross the road where you’ll find the Ancient Cemetery. Walk up the few steps, through a gate and you’re in a small area filled with celtic crosses, graves, slabs and tombs. 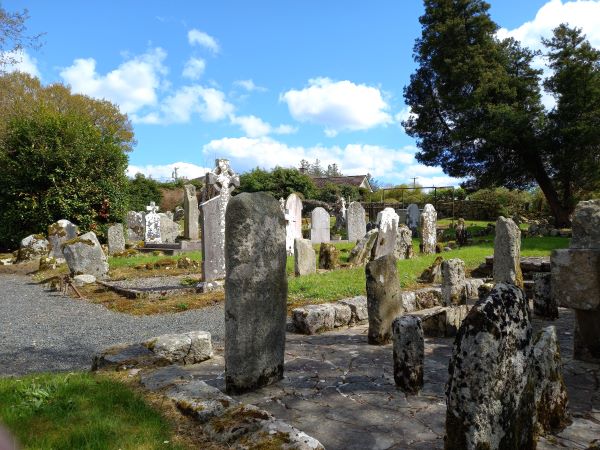 Unfortunately, there’s no path so you’ll have to walk on the grass. It’s difficult to make out the inscriptions on these headstones because most are very weathered and some are falling down.

This cemetery is all that remains of the original monastery and it’s believed that St. Mogue and other saints (St. Finán and St. Onchú) who were associated with the monastery are buried here.

Across the road from the Ancient Cemetery is Clonmore Prayer Garden. Upon entering this little oasis, the first thing you’ll hear is the relaxing sound of water. Look to the right and you’ll see St. Mogue’s Well situated near a stream. Take a few steps down to get a closer look. The water here is thought to have curing properties. 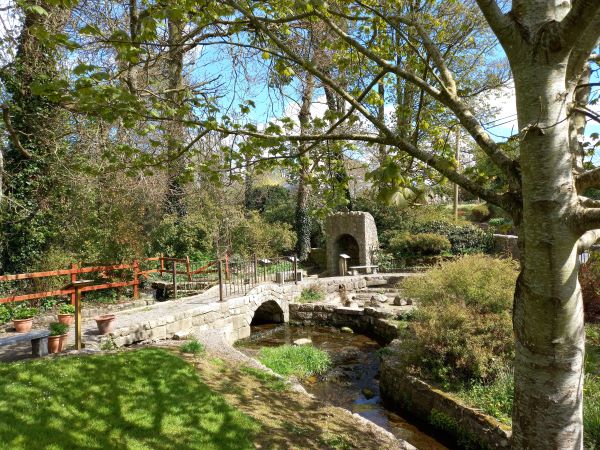 There’s a gravel pathway, gorgeous plants and scrubs, small waterfalls and places to sit and enjoy the peaceful surroundings. A bridge with iron railings spans the small stream and leads up to lovely green area.

This is an ideal place to spend some time thinking and relaxing.

When you come out of the Prayer Garden, the Triple Bullaun Stone is located to the right on the other side of the road. Look over the wall of the bridge and you’ll see it in a field beside a stream. 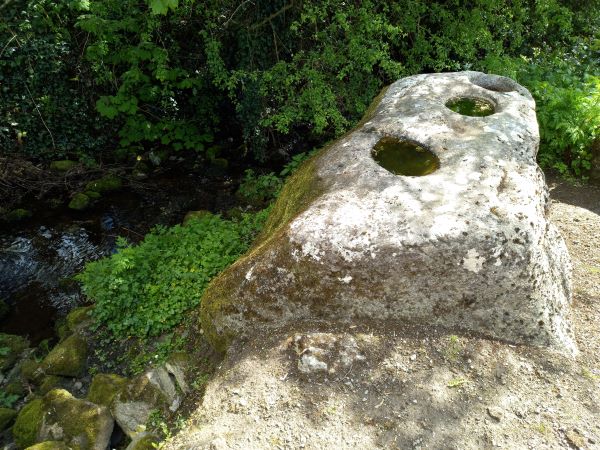 Also known as a quern-stone, archaeologists believe that these types of stones were once used for grinding ingredients or used as mortars in the smithing of metals.

With your back to the Bullaun Stone, walk across the road and you’ll see Clonmore Castle in the distance to your left. 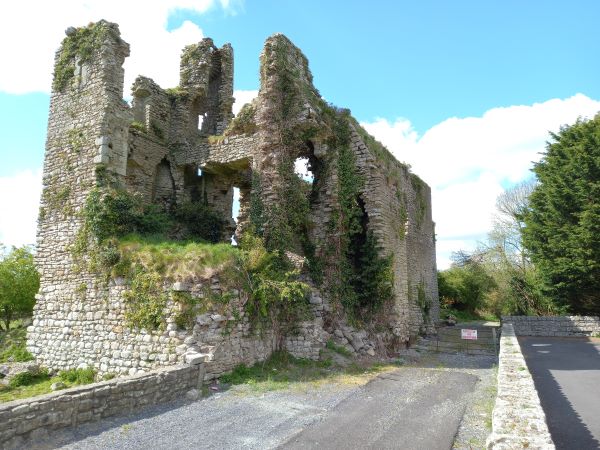 Surrounded by greenery, it’s in a poor state but is still worth a visit.