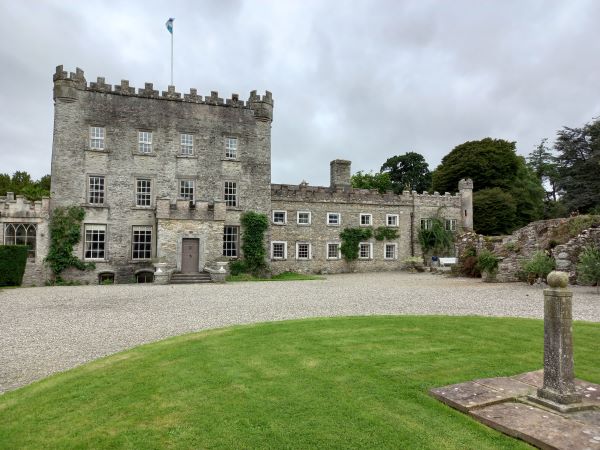 Huntington Castle is one of my favourite places to visit. It’s got everything - a guided tour of a castle that’s packed with a fascinating history, spectacular gardens, a playground for the little ones and a café.

Huntington is about half an hour’s drive from Carlow town. Follow the N80 towards Ballon and Enniscorthy. Around 6 kilometres past Ballon turn left on to the L2024 heading towards the village of Clonegal. Don’t worry - it’s well signposted. When you reach Clonegal, turn right and drive down through the village towards the river. The entrance to Huntington Castle is on your right before you come to the bridge.

Drive up the avenue and the car park is on your right opposite the entrance to the courtyard. After you park your car, a nice idea is to walk back down the avenue to the main entrance and start your experience on foot from here. When you’re driving you may miss many of the fantastic sights, sounds and features of this part of the attraction. 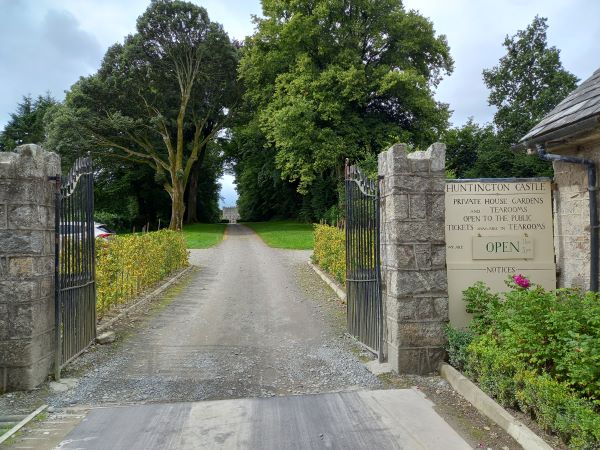 This is a really nice walk with tall French lime trees on either side which were planted by Lord Esmonde in 1680.

Nearly halfway up the driveway there’s a laneway to your left which brings you down to a bullaun stone. Once you’re on the laneway, hop over the gate on your right and the stone is in a field diagonal to the gate. Bullán is the Irish word for “bowl” and there are many theories as to their function, whether religious or otherwise. 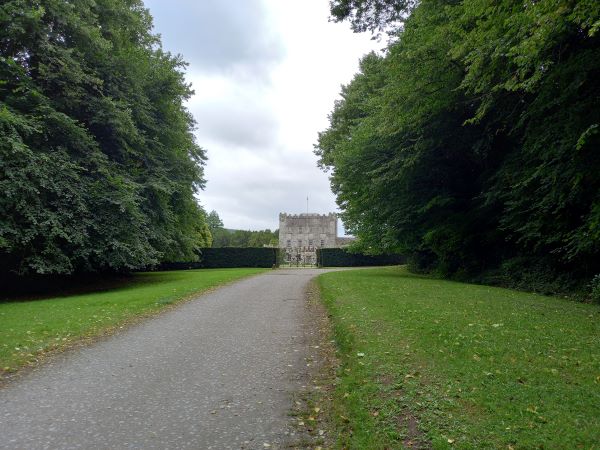 Back on the main avenue continue on towards the ornate gates at the top of the driveway and you’ll get a nice view at the castle with its perfectly manicured front garden. As you approach the castle, you’ll see the square bit at the front which was the original part of the building and over the years this was added to and extended. 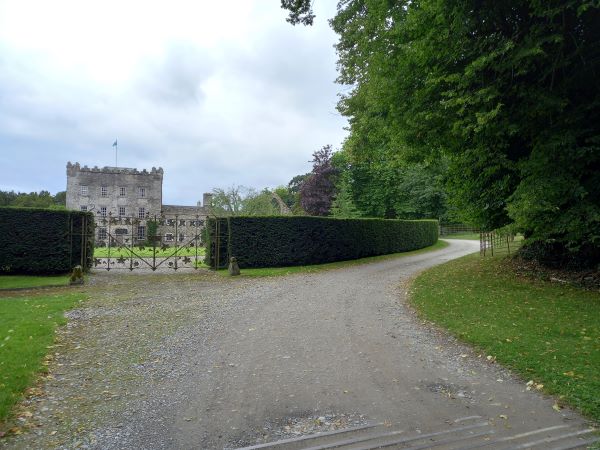 The driveway gently curls to the right bringing you to the side of the castle. Occasionally you may even see some pigs dozing under the trees in the field opposite. 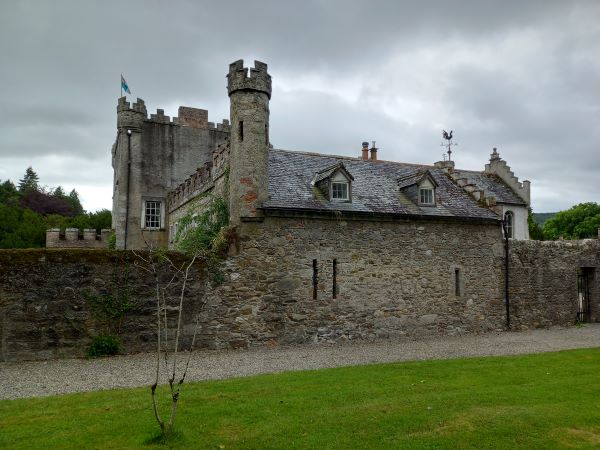 Walk towards the entrance across from the car park which brings you under an arch and into the courtyard at the back of the castle. 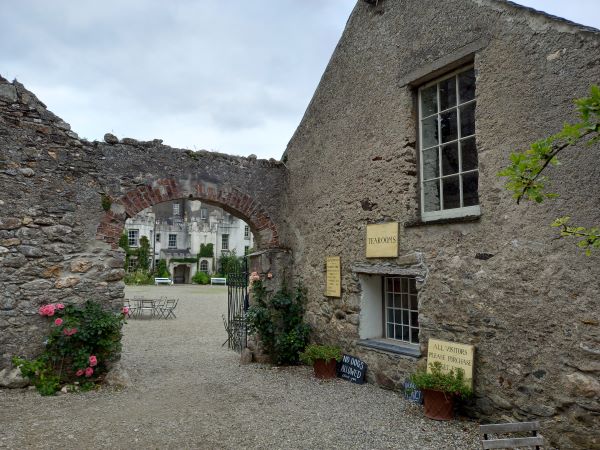 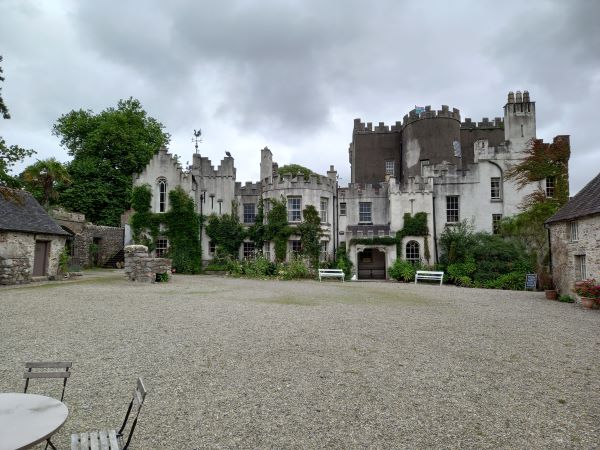 The castle was built in 1625 by a family called the Esmondes who came over from England in 1192 with Strongbow. They were French and part of the Norman Conquest of England. The first place they settled was Huntington in Lincolnshire and that’s how the castle got its name. (The Esmondes were also involved in the building of Johnstown Castle which is outside Wexford town).

Huntington Castle was originally a garrison for soldiers and there’s two reasons why it was built in this location. The first is that it’s over a well (which is in the basement). If the soldiers were under siege, at least they had a constant supply of water.

The second reason is that the castle is situated near the River Derry which is a tributary of the River Slaney. The Slaney flows through Bunclody, Enniscorthy, Wexford and then on to the sea. So it was a very important travel, transport and trade route. One of the jobs of the soldiers back then was to keep those routes open and trouble free which they did very successfully.

The bridge in Clonegal was built by the Esmondes and a toll was charged to make money and keep a check on who was coming in and out. There were about 5,000 people in the area which was quite a lot back then. There were so many people because they felt safe due to the presence of the soldiers.

The Esmondes decided to take the castle back and make it into a family home in around 1675.

The café has a nice selection of teas, coffees and tasty, sweet things. It also sells books, postcards, gifts, children’s toys, shortbread, fudge, jams and more. Originally, this building was an old mill and in 1780 it was turned into a barn theatre for entertainment. 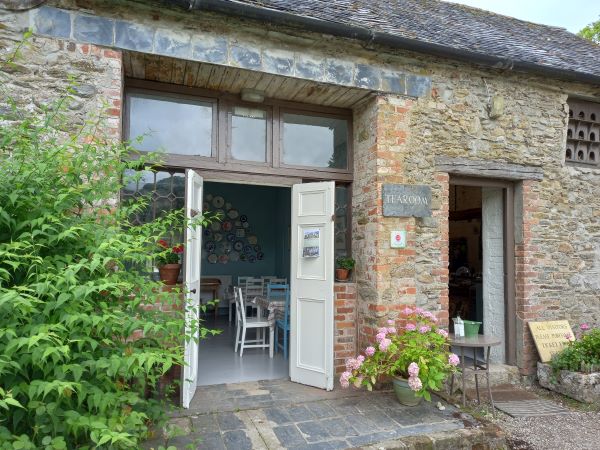 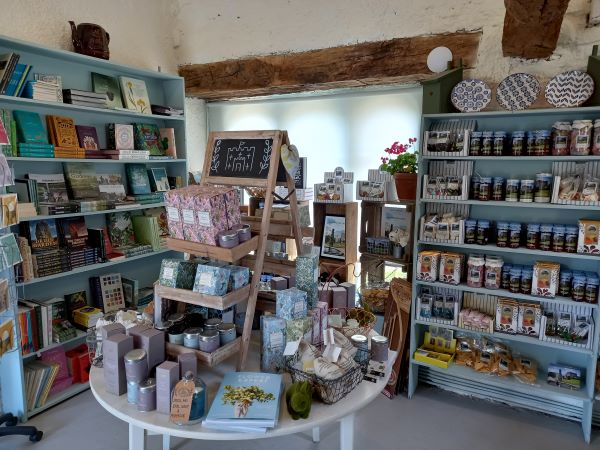 A selection of the goodies inside the café

My favourite way to “do” Huntington is to have coffee and cake first then do the house tour and finally walk around the gardens. 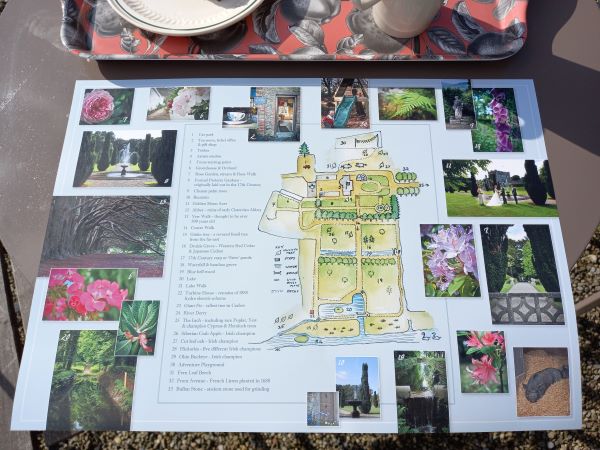 Map of the gardens

There’s a seating area inside the café but if the weather is fine why not sit out in the courtyard and take in your surroundings. There are plenty of tables and chairs here if you wish to enjoy your coffee al fresco and you might even meet some of the peafowl foraging on the gravel! 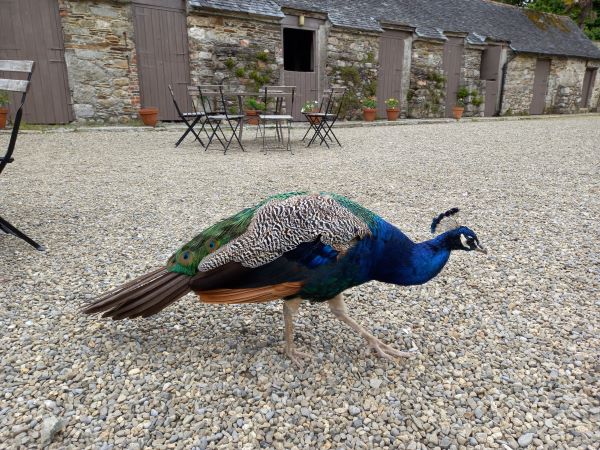 The Tour of the House

Taking about 40 minutes, the tour is either given by a member of the Durdin-Robertson family or an experienced guide. Different tours show different rooms. There’s no photography allowed in any of the rooms as the family still live here but you may take photographs of the items in the basement where the Temple of the Goddess is located. 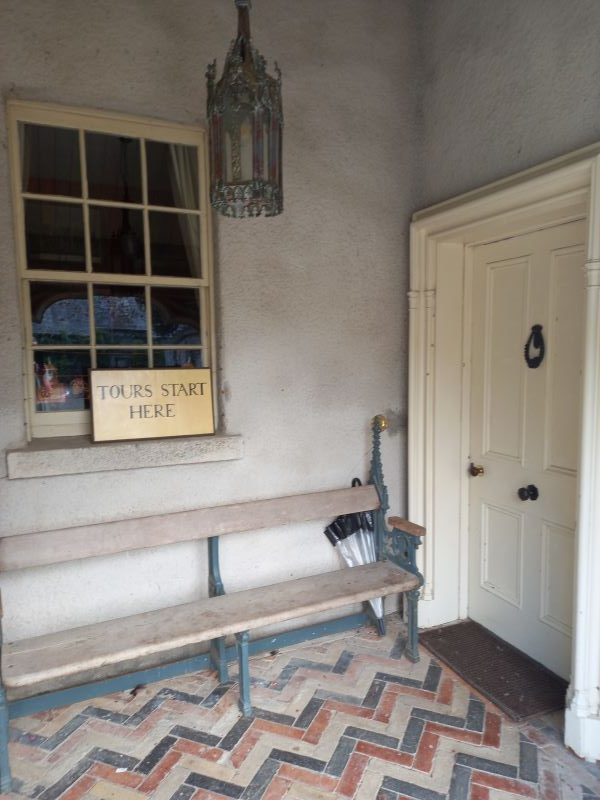 I don’t want to give too much away but I will say it’s well worth the entrance fee.

Some of the highlights include body armour worn during Cromwellian times, Bedouin tent hangings from North Africa dating back to the 1840s and a child’s high chair with an interesting connection to the poet Milton. You’ll get to see a vine that was an original cutting from one at Hampton Court Palace in London (which was given to Anne Boleyn by Cardinal Wolsey), a cassone from Florence in Italy and you’ll hear the story about the unfinished painting in the Tapestry Room. You’ll also see how inventive the Victorians were in the kitchen of the castle and in the basement you’ll learn about the Fellowship of the Goddess religion that has 32,000 members worldwide!

When you finish the tour and exit the basement, the tour guide will give you some information about visiting the gardens. 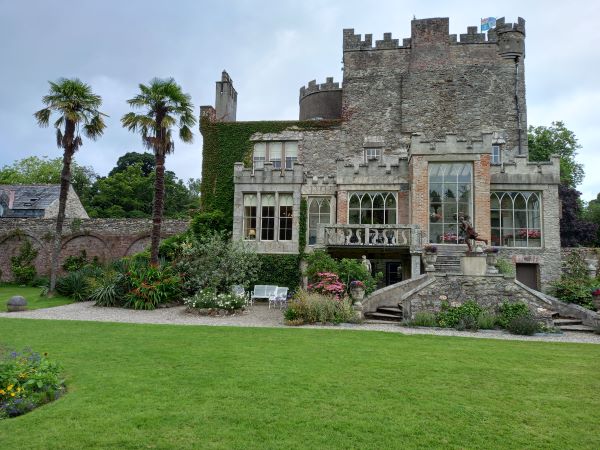 After that, walk up the steps that are nearest to you to the top lawn and you’ll get an up-close view of the front of the castle. 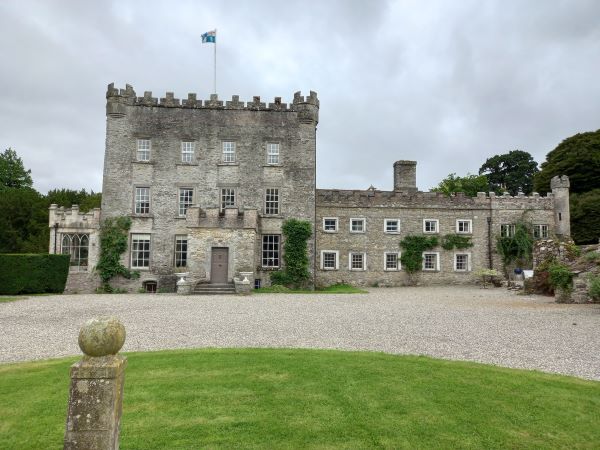 During the Middle Ages this site was a Franciscan friary and here you’ll find the ruins of an abbey dating back to the 9th century.

From the top lawn, there’s also a picturesque view down the avenue towards the main gates. 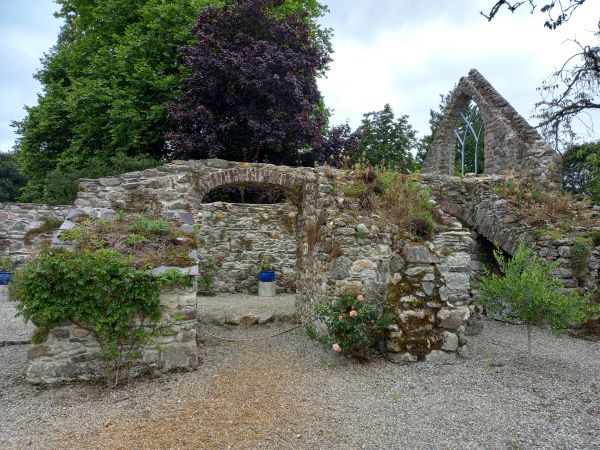 Leaving the front of the house and coming down a different set of steps, you’ll notice that the gardens at this side of the house are quite formal. The Esmondes took their garden inspiration from France and the French style was all about straight lines and symmetry. You’ll see Irish yews (the upright form) which were planted in the 1860s and they came from Florence Court in County Fermanagh. 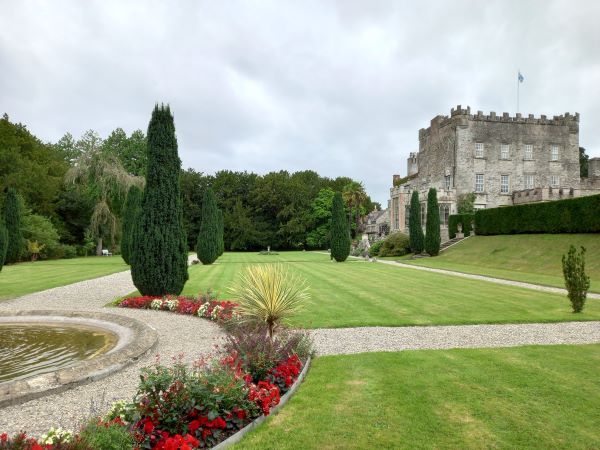 There are several paths you can take to explore the next part of the gardens but here’s my favourite one. Instead of starting at the Centre Walk which is straight in front of you, why not take the path to your left which brings you down a more interesting route.

First, you’ll come to the famous yew walk which is well over 500 years old. The yews form a fantastic natural archway in the garden. These are English yews (taxus baccata) and are thought to have been planted by the monks as a hedge. This is a lovely peaceful part of the garden which doesn’t change through the seasons. 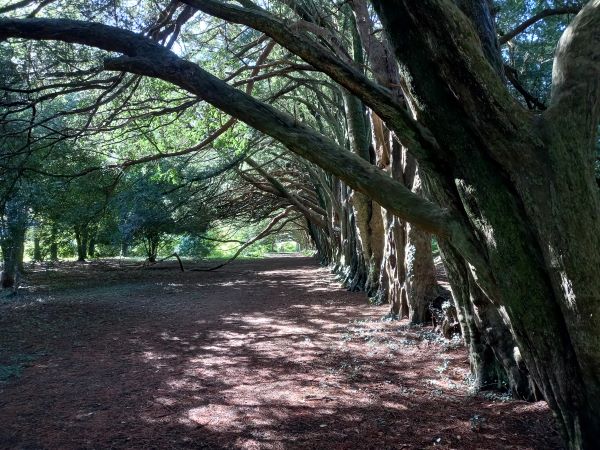 Continue walking by the edge of Druid’s Grove with its sparse collection of tall cedar trees and you’ll soon come to a barely noticeable fork in the path. Taking a left will bring you around by the perimeter of the gardens but take a right and this will bring you over a little foot bridge to the 17th century carp ponds. There are two ponds, one on either side of the Centre Walk. They don’t have much water in them these days but they’re still an interesting feature of the gardens. 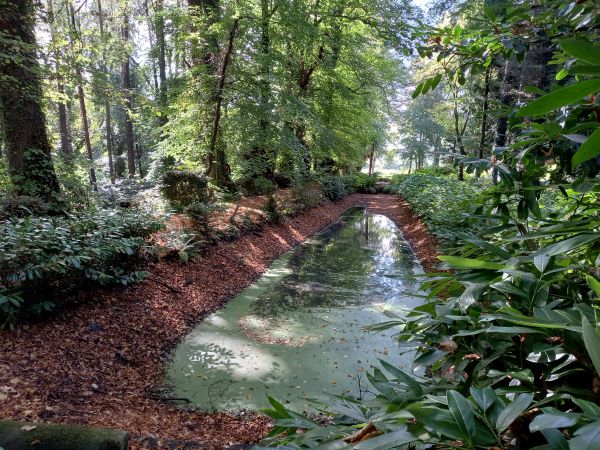 Immediately after crossing the foot bridge, turn right. Bluebell Wood is on your left and the carp pond is to your right. Keep going until you reach the Centre Walk. Take a left and this gravel path will bring you to the lake (this is a man-made feature more like a large pond). When you reach the railings, take the path to the left which brings you up some steps and on towards the Lake Walk.

Take care on this part of the walk as it’s quite narrow and there’s lots of tree roots protruding through the path. 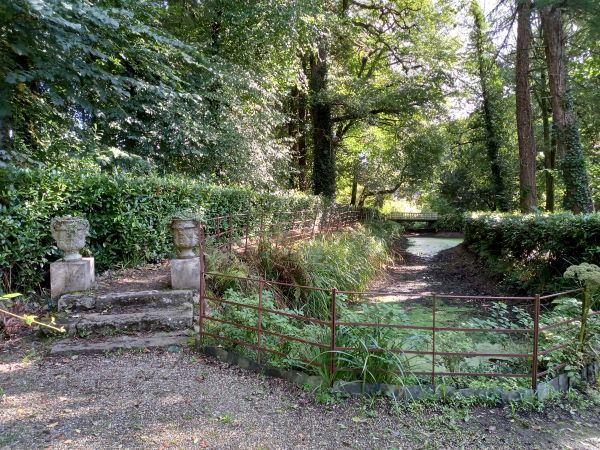 The path at the railings

Take a right when you reach the white balustrades and shortly you’ll come to what looks like an old shed.

Huntington was one of the first private homes in Ireland to have electricity back in 1888 and this small structure is what remains of the brick turbine house where they produced the electricity. Have a look inside, it’s a bit ramshackle but you can still make out some of the original moving parts. It was in use from the 1880s to the 1950s until rural electrification came in. 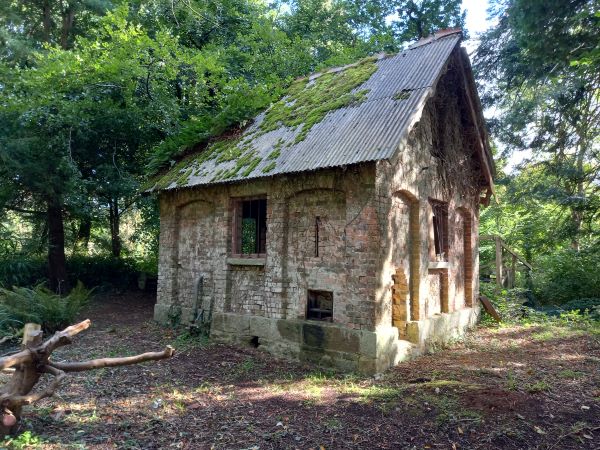 Walk around to the other side of the turbine house and you’ll see a gate into a field. Hop over the gate, walk towards 10pm and you’ll get a nice view of the River Derry.

Next, come back over the gate, walk up the path back towards the castle and take a left through the open, black, metal gates. Then turn right which brings you by the Rose Garden and up to the orchard and precast concrete greenhouse. This concrete framed greenhouse was erected by the present owner’s great grandfather - Manning Robertson who was an architect and town planner.

This route brings you back to the courtyard but there are many other paths you can take to explore the grounds. 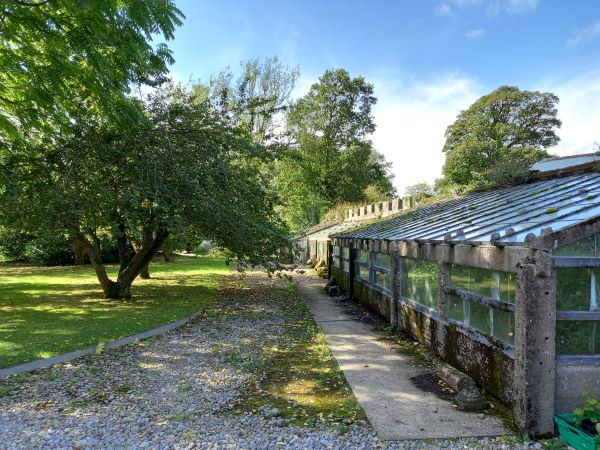 Visiting Huntington Castle is a great way to spend a relaxing few hours. I recommend doing both the gardens (weather permitting) and the house tour.

It’s also an ideal venue for weddings or birthday parties and they also do Halloween tours. You can even stay in the castle or in the Gate Lodge or Gate Cottage at the entrance to the castle gates.

Unfortunately, there’s no picnics or dogs allowed and wheelchair access is limited to certain areas of the gardens. 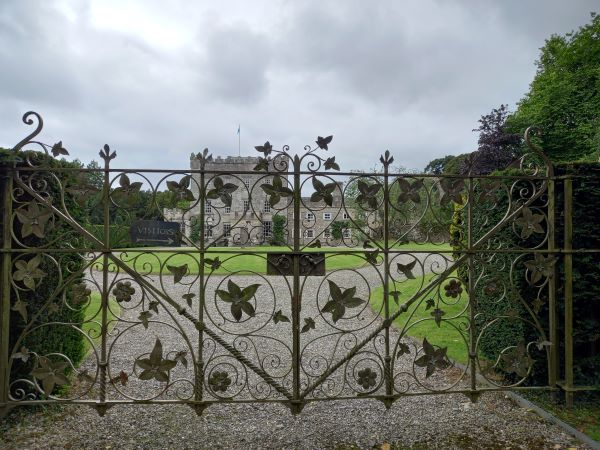