The Nurney Cross is a stone high cross with an imperforate ring. High crosses are also called Celtic Crosses because they’re found in countries where Celtic languages are spoken like Ireland and Scotland. 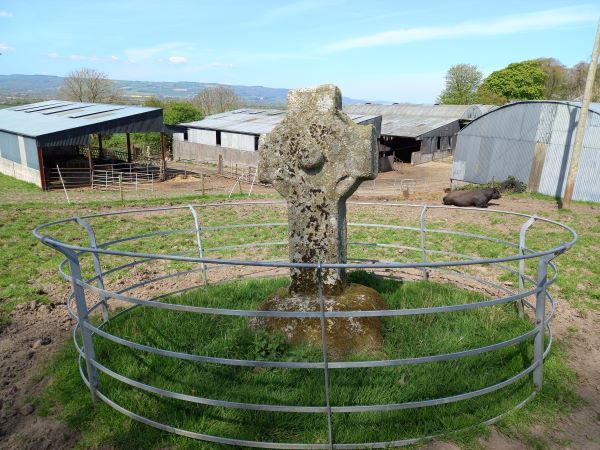 The trip only takes about 15 minutes from Carlow town.

Take the Kilkenny road (R448). After the Woodford Dolmen Hotel (on your right), take the second left (signposted Tinryland). Then take the first right (signposted Bagenalstown) and turn left at the Harrow Cross. This brings you into Nurney village.

There are no signs of any shape or form to help you find the cross. On the day I visited, I asked a local man for directions.

Just past the Nurney Inn pub on your left (a good place to park), there’s a wall which you can climb over into a field. Once you’re in the field, you’ll see the cross standing at a slope in the distance. (Because there’s sometimes farm animals in the field, you’ll have to scoot under an electric wire just at the wall).

But first, as the cross is on private property, you’ll have to ask at the farm beside the field for permission to enter. 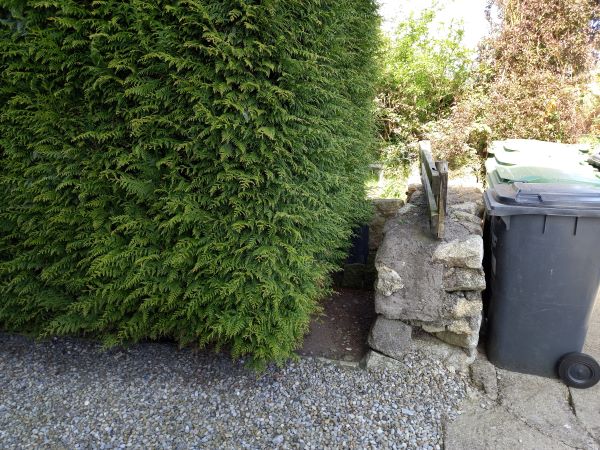 The wall beside the Nurney Inn pub

As you walk down towards the cross you’ll see the late 18th century St. John’s Church of Ireland with its needle spire to your left. 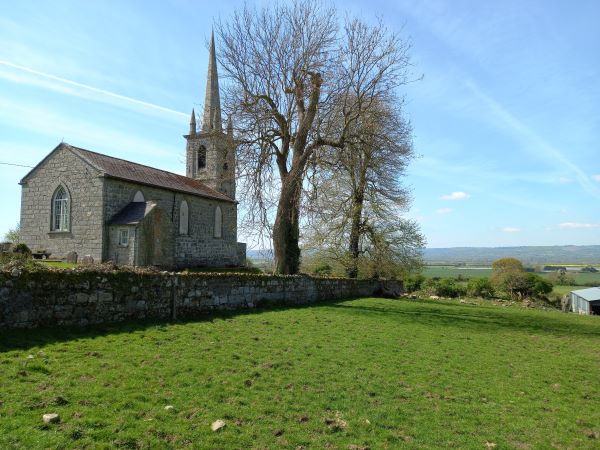 The Nurney Cross is one of three crosses which once stood in the area. It’s located on a monastic site which was founded by Abdán (an Irish saint) in the 5th century.

Set in a pyramid-shaped base and protected by a metal fence, this solid-wheeled, granite cross measures 1.88 metres high and 1.1 metre across its arms. In the centre of the head on each face there’s a single raised boss. The north and south sides are basically identical. 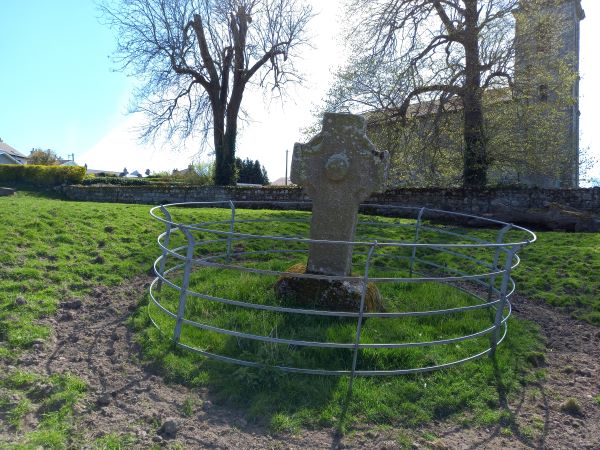 There’s no writing or inscription on the cross and there’s no plaque to help you understand more about it. 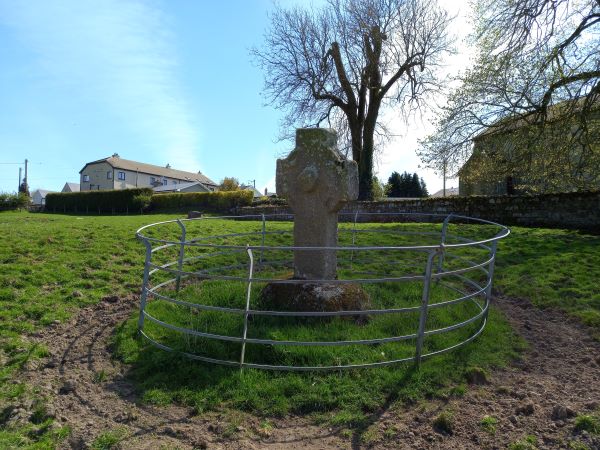 What Were the High Crosses All About?

High crosses like the Nurney Cross are dotted around Ireland on old monastic sites. It’s thought the crosses were used to mark boundaries, as focal points for religious ceremonies or to declare a territory as being Christian. 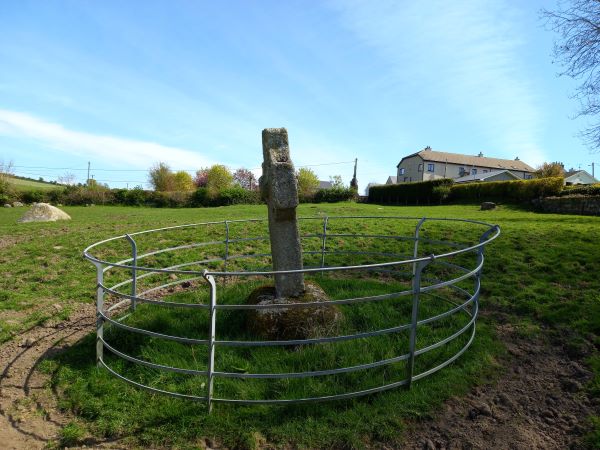 Some are up to 20 ft or more in height and many have panels depicting the old and new testaments. The carvings on the panels would’ve been painted with bright colours and were used as a tool to teach people about Christianity. 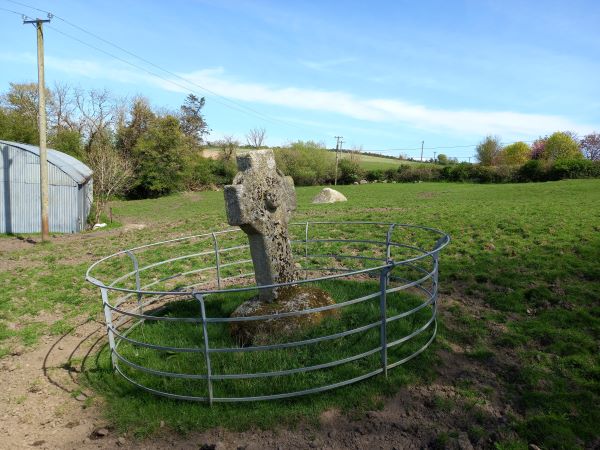 Encircled in a ring (which is thought to symbolise eternal life), the arms of the cross usually have a notch in them above and below (similar to the Nurney Cross). 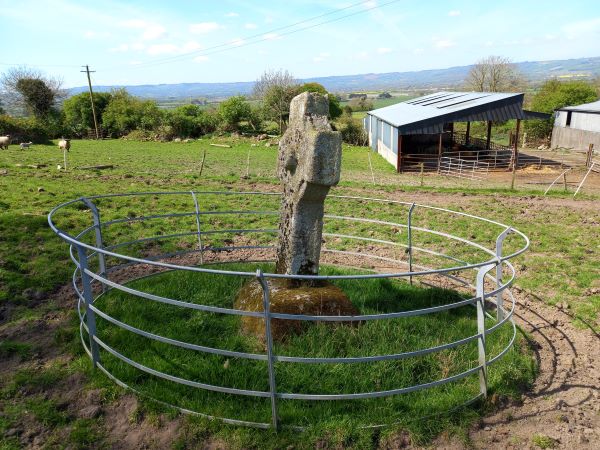 If you imagine the cross without the ring you’d realise that the ends of the arms would be very heavy. Because of the notch, there’d be a danger of the arms breaking off.

Therefore the ring is important structurally, providing extra support for the arms and keeping them upright. If there was a half ring on the bottom, it wouldn’t look right. 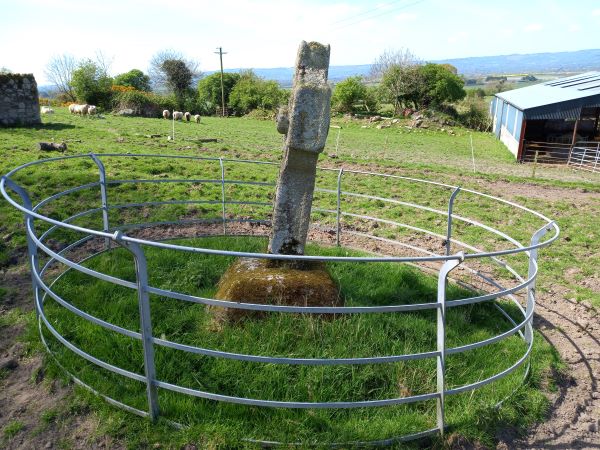 It’s a pity the cross is situated on farmland because it’s not an easy monument to find and get to. You’d wonder if it could be moved to the nearby graveyard or inside somewhere to protect it from the weather.

When visiting, ensure that there are no farm animals in the field and if the weather is bad it’d be a good idea to wear boots.