Located in the north-west of the county on the border with Laois, Carlow town (the county capital) is surrounded by beautiful countryside.

It’s the largest town in the county having a population of about 25,000. With a considerable student population thanks to the Institute of Technology Carlow and Carlow College (St. Patrick’s), Carlow is not only vibrant but it’s also a multicultural place. 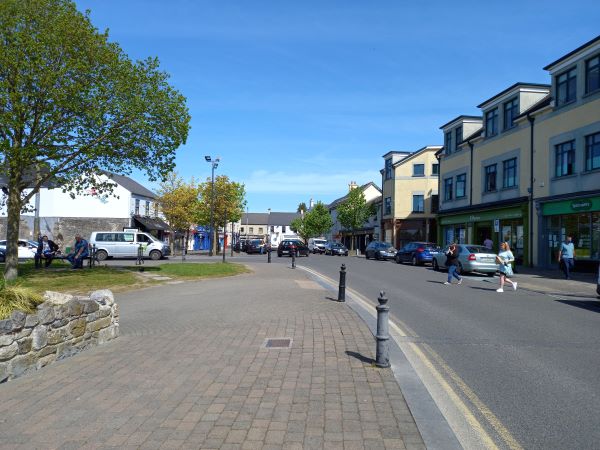 The town itself really became vibrant around the end of the 1500s with Dublin Street, Tullow Street and Castle Street being its three main streets.

It was a large, medieval market town, and we know that because of the names of certain areas like Haymarket and Potato Market. Markets and fairs were held in these parts of the town right up until the 1950s, where people came in with their agricultural products and their animals and traded them. 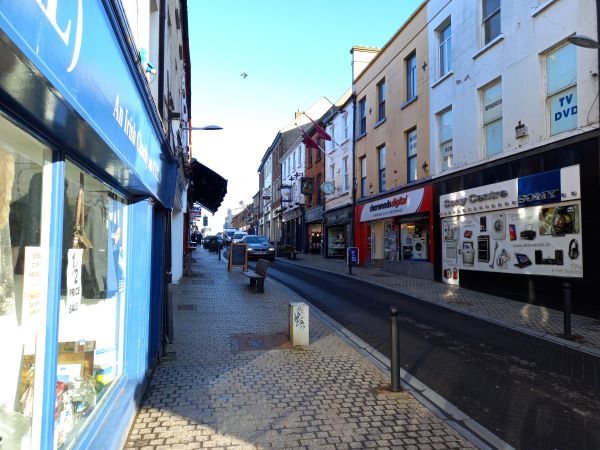 Today, with its many tourist attractions, including stunning green areas, museums, riverside walks, restaurants and cafés, Carlow is an ideal place to visit. 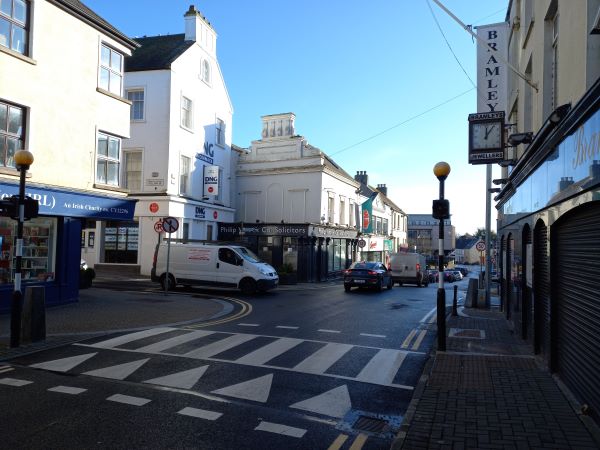 If you like to shop, Carlow is a great place to be! 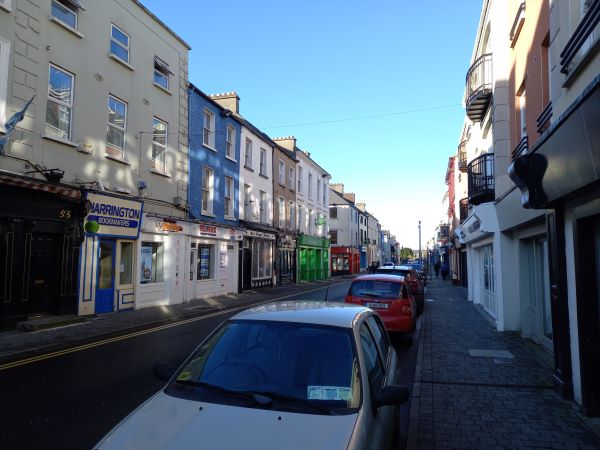 There are many restaurants and pubs to suit everyone and in the weekend evenings there’s a lively atmosphere.

It also has a reputation for being a friendly place where locals, students and tourists can relax and enjoy all the town has to offer. 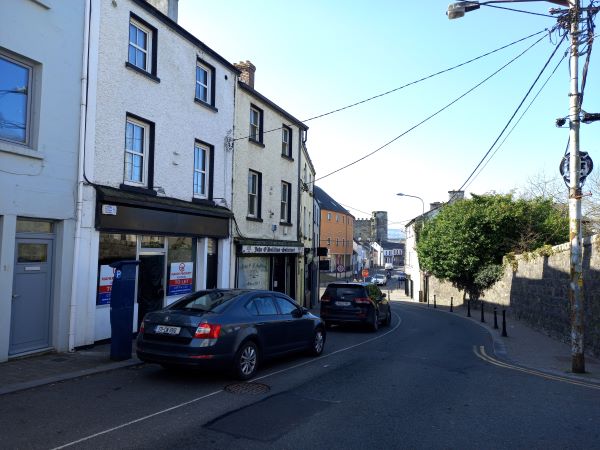 Castle Street with a view of Carlow Castle in the distance

Carlow Gaol on Kennedy Avenue is where our tour begins. It was in operation as a gaol from 1800 to 1897 and was then used by Thompsons for their engineering business for most of the 20th century. Now it’s Carlow Shopping Centre.

The main gate (Barrack Street) was constructed using local granite and public hangings took place at this entrance. The original gallows trap door is on display in Carlow County Museum.

Immediately inside the entrance is the three-storey Governer’s House. 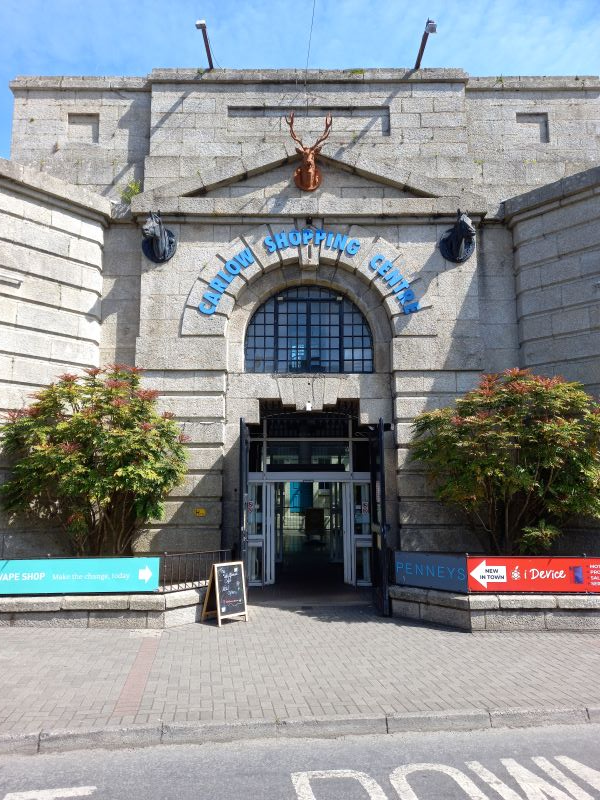 The animal heads above the gaol entrance were salvaged from the 1930’s fire at Duckett’s Grove.

Our next stop is the River Burrin and a good place to view it is just off Burrin Road. Walk out of Carlow Shopping Centre on to Kennedy Avenue, turn left and left again. Cross the road at the pedestrian crossing then turn right and you’ll see Burrin Road ahead of you. Walk past the row of quaint cottages until you come to steps on your right that lead down to the water.

At this part of the River Burrin, the area is a bit wild and unkept but it’s still a nice place to spend some time watching the water flow over the small rocks.

Originating on Mount Leinster, it flows through Carlow town where it joins the River Barrow. 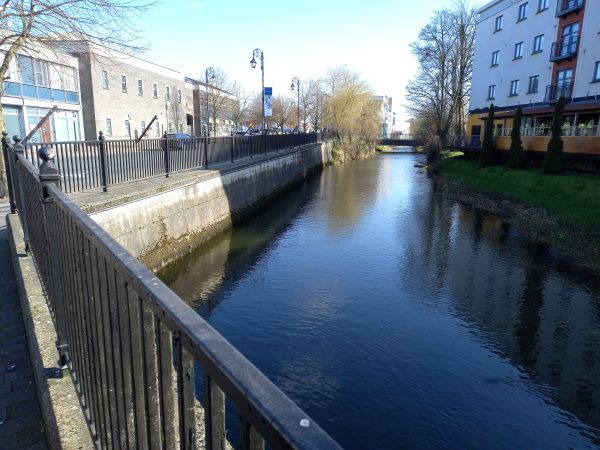 You can partially follow the Burrin into the town by walking through the bus car park, crossing the road at the pedestrian crossing, turning left and entering Hanover Park. Walking through the park by the river will bring you into the old Penney’s car park.

Now cross the bridge and turn left back on to Kennedy Avenue and from here you’ll see the river on your left. Make your way towards the end of this street until you come to Burrin Bridge. This is also a nice spot to take in the view of the Burrin.

Cross the road to the corner of Burrin Street and Kennedy Street and you’ll see Deighton Memorial Hall.

The mid-18th century Deighton Memorial Hall was the County Courthouse and the seat of the Grand Jury (which preceded the County Council) until the early 1830s. Lucinda Sly was tried here for the murder of her husband. 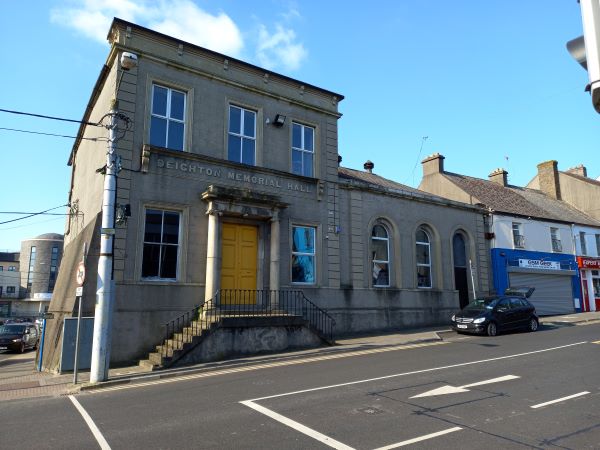 In the late 1800s, it was home to the Deighton Plumbers & Vulcan Foundry & Ironworks. Owner Joseph Deighton gave the building to St. Mary’s Parish in 1909 to use as the Parochial Hall.

Unfortunately, you cannot enter the building to see what it’s like on the inside.

From Deighton Hall, walk down Kennedy Street and cross the road at the first pedestrian crossing. Take a left at the sign for Éist Cancer Support Centre and you’ll find Carlow Castle on your left.

Near the town centre, overlooking where the Barrow and Burrin rivers meet is the ruins of Carlow Castle.

Started by William Marshall (son-in-law of Strongbow) sometime between 1208 and 1213, all that remains is the west wall and two corner towers. Originally, it would’ve been a rectangular structure with the walls reaching about 90 to 100 metres high. 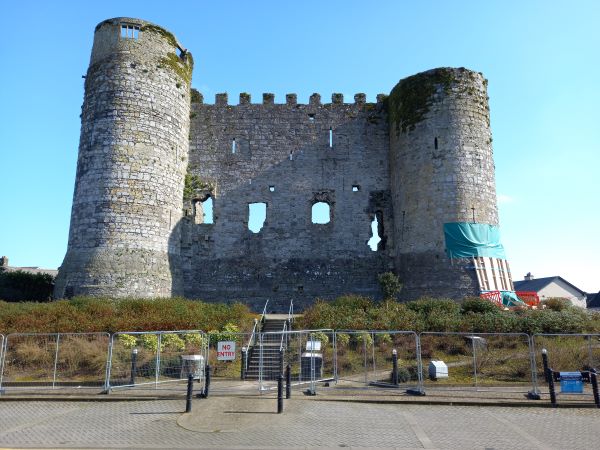 On the ground floor there was vaults used as dungeons for prisoners and also used to store documents and historical archives. 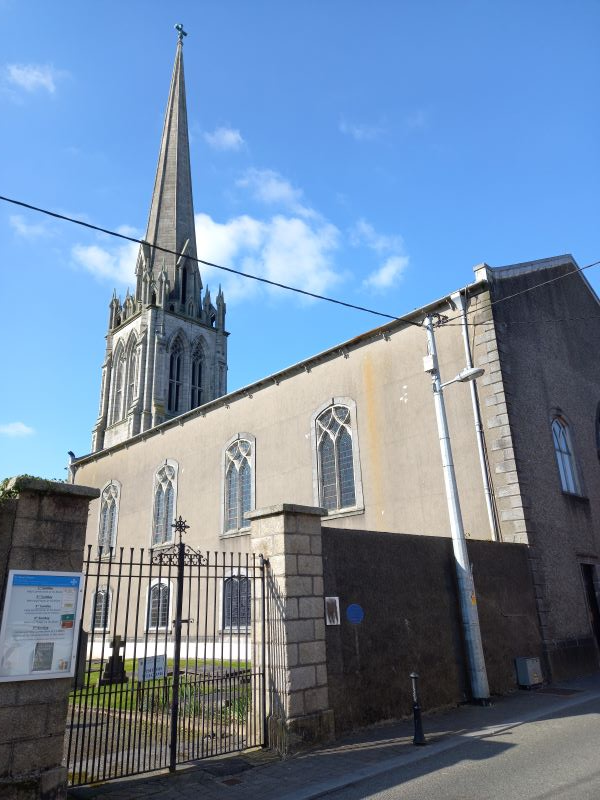 Inside there are some monuments by the architect Sir Richard Morrison.

Continue on to the Haymarket and you’ll see the Town Hall in front of you.

Designed by the church architect William Hague in 1884 and opened in March 1886, the Town Hall is now used as offices for the County Council. 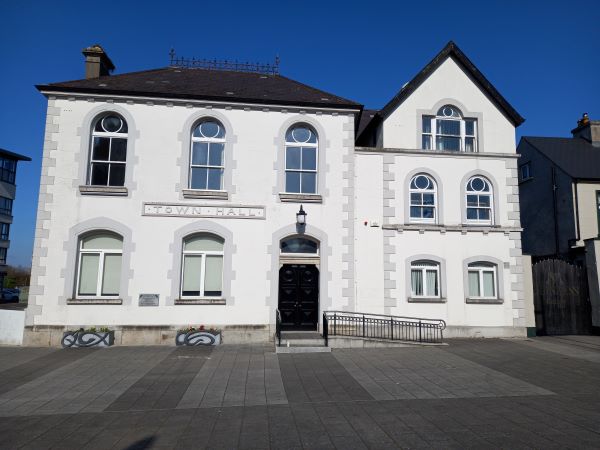 You’ll notice the iron work of the old gas lamp over the front door which was converted for electrical use in 1891. Carlow, after Dublin and London was the third town in the British Empire to have electricity.

Now take a left and walk down towards the River Barrow.

The second longest river in Ireland, the Barrow flows for 192 kilometres from the Slieve Bloom Mountains to the sea. You can walk by its banks from Robertstown in County Kildare to St. Mullins in the south of County Carlow and this path is called the Barrow Way.

Climb the steps on to the platform and there’s a lovely view of the river, the Town Park and the Millennium Bridge. 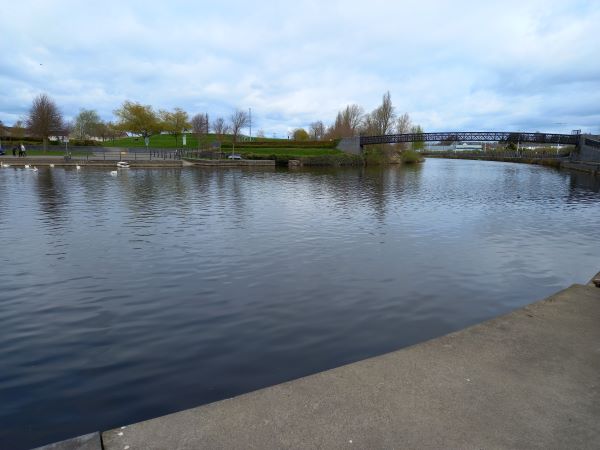 View from the platform

Up until the 1960s, the Barrow was an important commercial waterway and barges carried beet to Ireland’s first sugar factory at Carlow.

Walk onto the Millennium Bridge (which has a ramp for wheelchair access) and you can get more great views of this beautiful stretch of water from both sides. 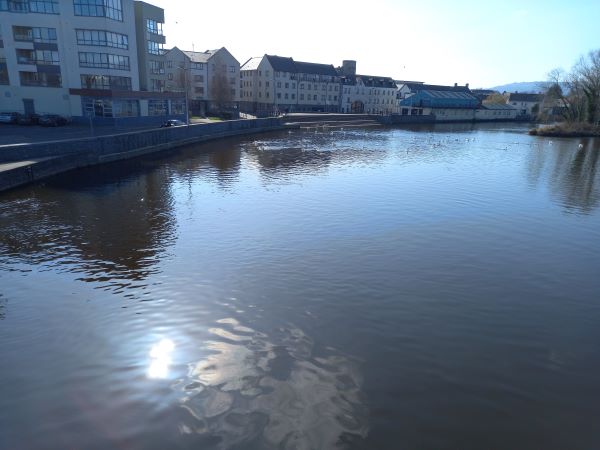 View from the Millennium Bridge

When you cross the bridge and enter the Town Park you’ll see a spot where you can take a guided tour of the Barrow by boat. This is a great chance to relax while enjoying the natural beauty of the river.

Keep walking over the bridge and in to the Town Park.

The first thing to do when you enter the Town Park is turn left and follow the path down to the water for an up-close view of the swans.

This 12-acre park is filled with trees, shrubs and hedging and there’s lots of grassy areas to play football. There’s also an excellent children’s play area with swings and slides. 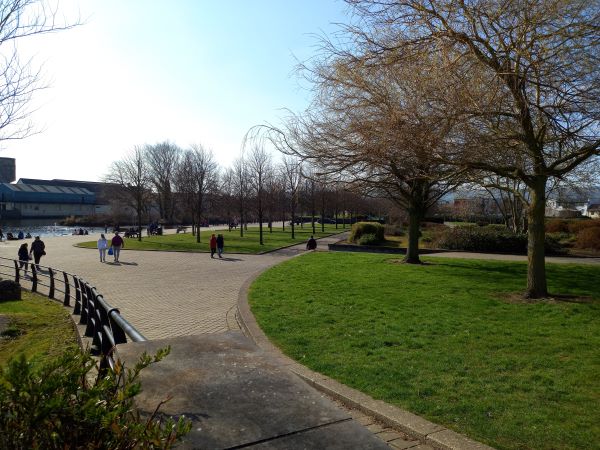 Climb the grassy hill you’ll get a fantastic view of the whole park, the Barrow and the Killeshin Hills.

There’s plenty of seats, toilet facilities and some parking also.

Cross back over the bridge and walk up Cox’s Lane to Dublin Street where our next stop is the Assembly Rooms on the corner to your left.

Once belonging to the playwright George Bernard Shaw, the Assembly Rooms were built in 1794. It’s thought that the Carlow gentry used it for hosting dinners and concerts and later it became a venue for lectures and was even used as a cinema.

It became Carlow’s Technical School in 1923 and is currently used as offices for Carlow County Council.

Walk to the end of Dublin Street to Carlow Courthouse.

Dating from the 1830s, Carlow Courthouse was designed by William Morrison and resembles a Roman temple set on a height.

Built using Carlow granite, this decagonal shaped building consists of two large D-shaped courtrooms with a maze of cells and dungeons in its basement. 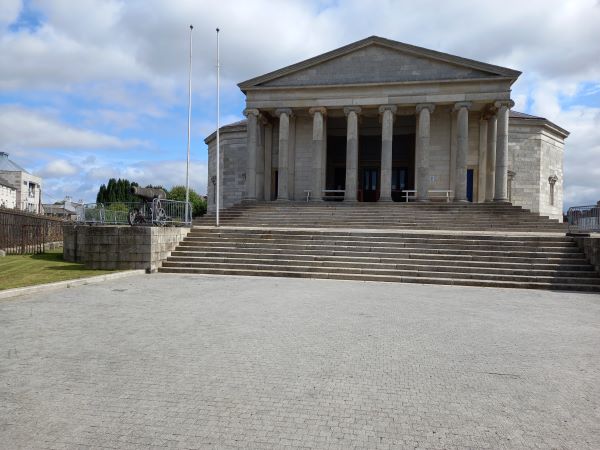 The cannon at the top of the steps outside comes from the Crimean War and commemorates the Irish casualties of that conflict. The courthouse is located on the site of a former quarry.

Walk out the Athy Road to County Carlow Military Museum which is on your right after St. Dympna’s Hospital.

An old church on the grounds of St. Dympna’s Hospital is home to County Carlow Military Museum. This small but packed museum features a range of galleries and a huge variety of rare and important artefacts. 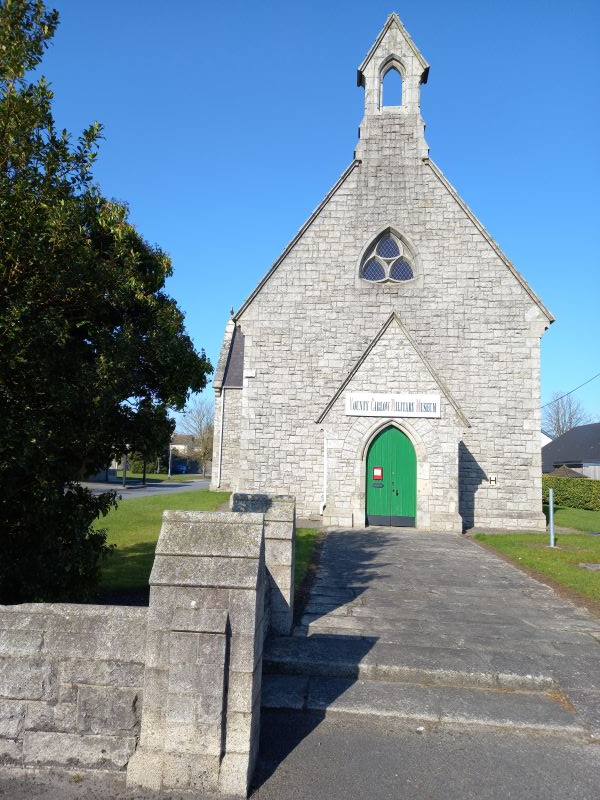 Highlights of the museum include a pistol belonging to Myles Walter Keogh who was the only Irish officer to take part in the Battle of Little Big Horn.

Also on display is equipment used by Irish Peacekeeping forces during their time in the Congo.

Walk back towards Carlow Courthouse and on to Carlow College on College Street.

Opened in 1798, Carlow College or St. Patrick’s College as it’s known locally is Ireland’s second-oldest third-level institution after Trinity College. It originally trained men for the professions and for priesthood but now specialises in Arts, Humanities and Social Studies.

The college has connections with Carlow University in Pittsburgh, Pennsylvania. 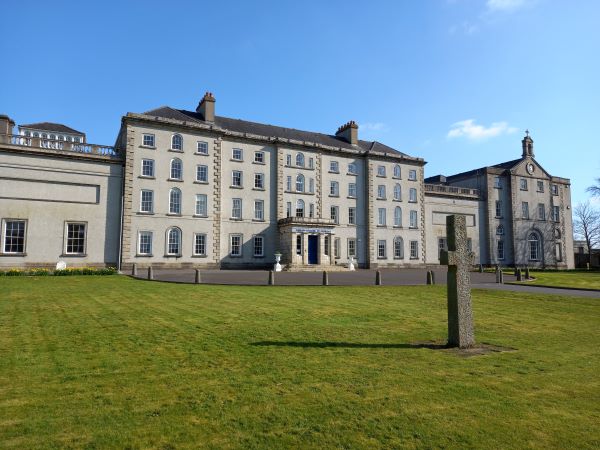 Behind St. Patrick’s is a fantastic green space ideal for playing sports, walking or relaxing under shady trees.

VISUAL is immediately beside Carlow College.

As it’s more commonly known, VISUAL, is an ultra-modern centre for art based in the grounds of Carlow College hosting local, national and international work.

Comprising of four principal gallery spaces (the main gallery is the largest space in the country), you’ll love spending time looking at the paintings and sculptures. 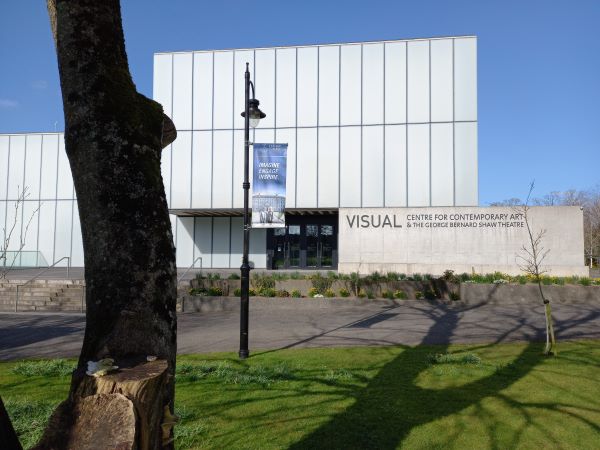 The 355 seat theatre is an excellent venue for concerts and be sure to check out the timetable for great plays or arty films that are on from time to time.

Walk back on to College Street to Carlow Cathedral.

Constructed between 1828 and 1833 by Bishop James Doyle at a cost of £9,000, Carlow Cathedral is located on College Street. 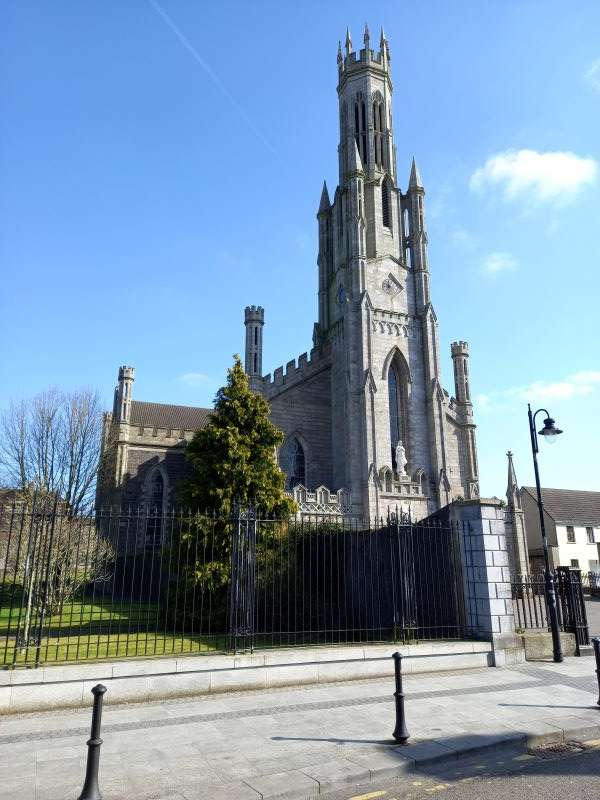 It was designed by architect Thomas Cobden who took inspiration from European Churches, especially the Belfry of Bruges in Belgium.

Its tower rises 46 metres high and the timber for its roof came from Oak Park.